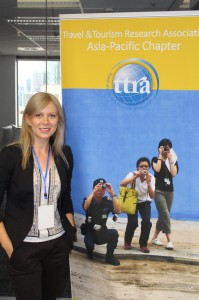 Research abstract is presented below :

Tourists increasingly rely on eWord-of-mouth (eWOM) to make a variety of travel related decisions, thanks to their easiness of access and multiplicity of contributors. Online Travel Reviews (OTR) are the most accessible and prevalent form of eWOM in the field of eTourism (Bronner & De Hoog, 2011; Dwyer, 2007). They represent people’s wish to share their travel experiences online, recommend a tourism product or complain about it. The potential OTR have to influence tourists’ decisions shall be ascribed to their argumentative nature (De Ascaniis & Gretzel, 2013): they provide, indeed, “opinionated” information, that is information based upon personal reflection and assessment of the reviewer’s experience (De Ascaniis, Bischof & Cantoni, 2013). The arguments put forward by the reviewer to support his/her opinions may appeal to the readers in different ways: according to common knowledge, to shared as well as to personal values, beliefs, expectations, wishes. An analysis of the arguments provided by tourists in OTR when evaluating a tourism destination allows to gain a precise and deep understanding of their experience and, thus, to capture the overall perception of the destination. An argumentative analysis of a sample of OTR on Jiuzhaigou National Park in China is presented, which is a UNESCO World Heritage Site often regarded as a benchmark for the management of other National Parks in China. Aim of the study was to investigate the arguments given by visitors when commenting either positively or negatively on the park, and to see if and which are the differences between domestic and outbound tourists’ perception. A particular emphasis was put on comments related to the park’s management, with the aim of highlighting if and how tourists’ perceptions of environmental-friendly solutions implemented in the park can be reflected in their reviews. Results have a number of implications for the management of the destination.

Given their increasing importance as information source, a number of studies have investigated OTR under different respects and with a variety of purposes (Biger & Lasser, 2004; Gretzel, Yoo & Purifoy, 2007; Yoo & Gretzel, 2008, 2009; Dickinger, 2011; Jian, Gretzel & Law, 2010). On the industry side, companies are paying considerable attention to the importance of monitoring “what is told online” for keeping a good reputation and improving their business (Marchiori & Cantoni, 2012; Vermeulen & Seegers, 2009). Consumers’ reviews are perceived by readers, in fact, as trustworthy, reliable, enjoyable, more credible and more up-to-date than information provided by marketers, because they are written from a consumer’s perspective and on the base of direct experience (Dickinger, 2011; Arsal, Woosnam, Baldwin & Backman, 2010).

OTR have a high argumentative value: people writing OTR propose a reasoning chain to the reader, to support the recommendation they make. OTR, thus, can be seen as invitations by the reviewer to reason in a certain way, leading the reader to form an opinion about a tourism product/service and, hence, make a travel decision. (De Ascaniis & Gretzel, 2013; De Ascaniis & Greco Morasso, 2011). Argumentation analysis can enhance the understanding of OTR because it provides models for identifying and analyzing opinions (standpoints) and arguments (Rigotti & Greco Morasso, 2009, 2010).

A sample of OTR on Jiuzhaigou National Park published on Tripadvisor was collected, going backwards from 30th October 2014 to reach 10% of all the reviews published in any language. The sample comprised 325 OTR, 198 of them were in English while 127 were translated into English from Spanish, French, Brazilian Portuguese, Dutch, Bahasa Indonesian, Chinese and Japanese. Reviews were distinguished also according to a) the reviewer’s country of origin (where it was declared), and b) to the rating assigned to the attraction. a) 117 OTR resulted to be posted by Chinese people and the remaining 198 by outbound visitors, among which: 87 people coming from other parts of Asia, 40 Europeans, 44 Americans and Canadians, 14 Australians and New Zealanders. b) 238 OTR assigned Jiuzhaigou 5 out of 5 points, 73 4 out of 5, and the remaining 14 3 or less than 3 points.

The arguments in each review were identified, annotated and classified using a tool for text analysis (UAM Corpus Tool); they were first distinguished between positive and negative, then classified according to three main categories: arguments about tourism in China, arguments about the area outside the park, and arguments about the park itself. The other categories were built bottom-up until the saturation level that is until no other category was necessary to classify the arguments in the sample. Goal of the analysis was to point out the main arguments used to formulate a recommendation on the attraction, to highlight differences between domestic and international visitors, to have a view of how the management of the destination is perceived and how it can be improved.

In total, 967 arguments were identified and classified: 663 (69%) were positive and 304 (31%) were negative; 7 concerned tourism in China, 61 the area outside the park and 839 (93%) the park itself. The table below reports the most used positive respectively negative arguments when recommending a visit to the park, divided per domestic and foreign tourists.

* the percentages in column A are calculated against the number of positive resp. negative arguments about the park advanced by domestic visitors.

** the percentages in column B are calculated against the number of positive resp. negative arguments about the park advanced by foreign visitors.

*** the percentages in column C are calculated against the total number of positive resp. negative arguments about the park.

The park was recommended mostly because of its scenic views, the unique colors of waters and trees and the peaceful atmosphere, which was appreciated in particular by domestic tourists. When reporting about the scenery, foreigners often compared the park with other internationally known naturalistic attractions, stating that is exceeded their expectations. Contrasting opinions were found when evaluating facilities, in particular transportation, which was considered efficient and well-managed by some while confusing and inconvenient by others. The majority of the negative arguments were advanced by foreign tourists, who were annoyed by the long and unmanaged queues and by local visitors’ behavior such as littering, smoking, spitting, loudness and line-skipping. Low quality of food and catering services, inadequate signaling and communication barriers due to the fact that people working in the park did not speak English, were the most commonly negatively mentioned aspects related to the management. Only a few reviews directly commented on the environmental-friendly solutions, among which the most cited were the wooden boardwalks and eco-buses. However, the amount of negative comments addressing other people’s lack of environmental consciousness is regarded as an important factor demonstrating that visitors are aware that stricter rules for the park are needed.

Conclusion and Relevance to the Industry

The value of the study relies mainly on the method used, which allows to identify the parts of the OTR which might influence the most the opinion of readers and, thus, drive their visit decisions. Analyzing the arguments has a number of implication for the management, in that it makes it possible to grasp the reputation an attraction/destination shares among visitors, and to point out aspects in need for improvement.