#faces4heritage presented at the U.S. Department of State in Washington

In the frame of the global initiative P2P: Challenging Extremism, a class of Master students of USI – Università della Svizzera italiana (in the 1st picture) has been invited to present their project at the U.S. Department of State in Washington and to take part in the International Visitor Leadership Program (IVLP). 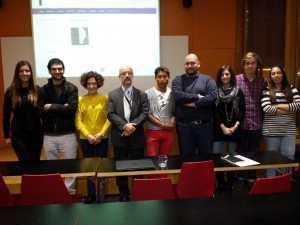 Goal of the global initiative, sponsored by the U.S. Department of State and coordinated by the EdVenture Partners, was to develop online campaigns to challenge violent narratives spread by terrorist groups, who increasingly use social network systems for their recruitment. USI students worked under the supervision of UNESCO Chair and USI professor Lorenzo Cantoni, assisted by Dr. Silvia De Ascaniis, and designed a campaign called #faces4heritage as part of the graduate course on eGovernment (Master of Arts in Public Management and Policy).

#faces4heritage aims at raising awareness about the violent destruction of heritage and the importance of preserving it as a fundamental part of people’s culture and identity, and contributes to the global UNESCO initiative #Unite4Heritage. The campaign received the official endorsement of a number of public institutions working in the heritage and tourism field, among which UNESCO and the European Travel Association.
The project entered the finals of the P2P initiative among 45 universities around the world. 5 students and dr. De Ascaniis on January 30, 2016 flew to Washington D.C. to present the campaign at the Department of State, in front of governmental representatives and counter-terrorism experts. The final competition was led by Ms Evan Ryan (in the 4th picture), Assistant Secretary of the US Bureau for Educational and Cultural Affairs. USI won the third prize (see the 2nd picture), after a class of the Lahore University of Management sciences, Pakistan – one of the highest ranked universities in Asia – and the US military academy of West Point. After the ceremony, the finalists received official acknowledgment by Sir Anthony Blinken, U.S. Deputy Secretary of State (in the 5th picture with the finalists). Prize of the competition was the participation to an IVLP on demand, an excellence program of the US government aimed at promoting US culture and establishing networks of experts. 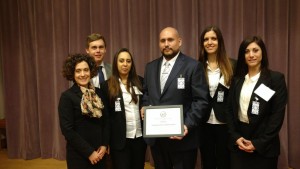 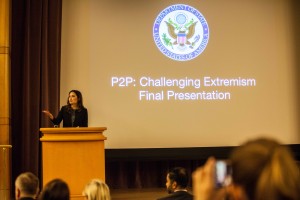 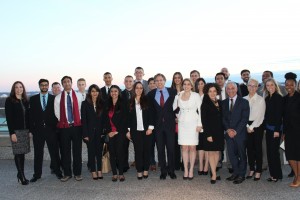 USI team visited three cities: Washington, New York and San Francisco, visiting representative spots of the American history and culture, meeting peers and researchers, enjoying cultural events. They even met president Obama (7th picture)! Along the way #faces4heritage was presented to a number of audiences: at the Eisenhauer Executive Office in Washington to representatives of the counter-terrorism unit of the US Department of State; at West Point Military Academy to the military community; at the New York University to researchers in international relations; to the opinion leader Daisy Kahn, founder of the Women’s Islamic Initiative of Spirituality and Education (WISE); at Facebook headquarters in Silicon Valley; at Berkeley University in San Francisco. One of the most exciting experiences for the Swiss group was to join the musical “The King and I” in Broadway, New York. 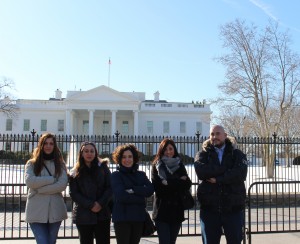 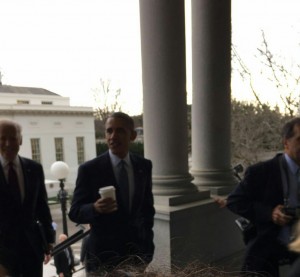 It was an extremely enriching experience, of which USI team is proud and grateful.

Some facts and links:
– #faces4heritage is featured on the homepage of the global UNESCO initiative #Unite4Heritage;
– it has been supported, among the others, by the Swiss ambassador in USA and the USA Ambassador in Switzerland;
– the Department of State realized an official video of the campaign;
– Evan Ryan, Assistant Secretary of the U.S. Bureau of Educational and Cultural Affairs devoted to it a note to the Challenge.